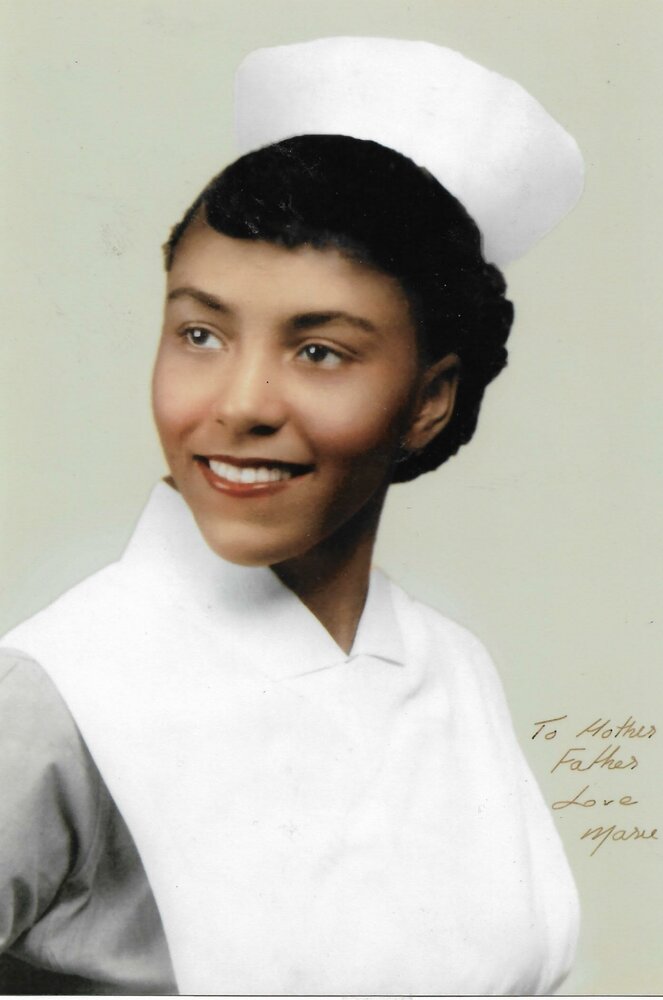 Please share a memory of Marie to include in a keepsake book for family and friends.
View Tribute Book
Marie Gray Harvey was born September 2, 1931 in Riverton, New Jersey to the late Reverend Charles and Izora Gray. She was raised in a large loving family of 8 children. Her family moved to Moorestown in 1938, while maintaining farmland in Mount Laurel. Marie attended and graduate from Moorestown High School in 1951, where she was the 1st Black member of the Girls’ Basketball team. Marie received her Registered Nursing degree in 1954 from the historically Black Mercy Douglass Hospital School for Nurses, Philadelphia, PA. Marie married James “Howdy” Harvey on April 15, 1959 and they raised three children (Lisa Harvey - Hill, Keith Harvey and Lois Valerie Shockey). Marie was dedicated to family, which included her extended family, and had a true gift for hospitality. Alongside her husband, she readily opened her home to anyone in need. Her home became a hub for family gatherings, holidays, and special events, which Marie hosted with love, style and wit. Professionally, she was a living example of grace and service. Marie was a proud veteran, serving her country as Second Lieutenant in the US Army, and was honored at the opening ceremony of “Women in the Military Service for America Memorial” in October 1997. Marie’s nursing career spanned over 40 years, including working as a nurse at Veterans Hospital located in Washington DC. She faithfully cared for her patients, mother and several family members (sister, niece, sister-in-law and friends). In addition to serving her country and family, Marie truly embodied the Christian value of charity in every domain of her life. She was an active member at Cherry Hill, Seventh Day Adventist Church, frequently visiting the sick and shut in. For over 20 years, Marie established and worked faithfully in the Food Pantry Ministry at Burlington SDA Church and at Cherry Hill SDA Church. The food giving program served about 40 families each month and continues to thrive to this day, leaving a legacy of generosity, charity and service. When God called Marie home to eternal rest on October 15, 2022, she left many behind to cherish her memory and continue her legacy: her daughter, Lois Valarie Shockey; son, Keith Barrett Harvey; daughter, Lisa Harvey Hill; and grandchildren Ashley Johnson (Javone), Jessica Hill, Kayla Hill, Philip Tate (Lori), Dorian Shockey (Angel); brother, Charles Gray, sister, Marcia Pope, along with a host of nieces, nephews and friends. She was preceded in death by husband James Howard Harvey, grandson Donald Tate, siblings Logan Gray, Roberta Cunningham, Virginia Winchester, Richard Gray, and Franklin Gray (Yvonne). Favorite Bible Verse - Trust in the Lord with all thine heart; and lean not unto thine own understanding. In all thy ways acknowledge him, and he shall direct thy paths. Proverbs 3:5-6 KJV
Print
Thursday
27
October