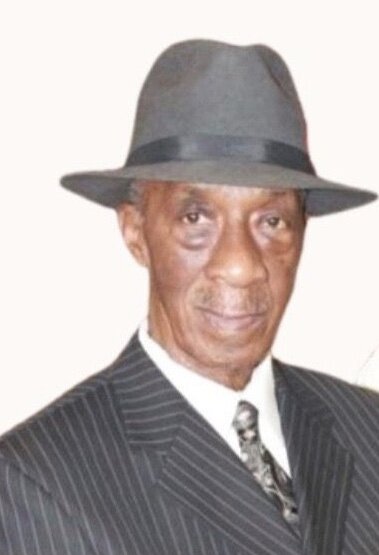 Please share a memory of Carlton to include in a keepsake book for family and friends.
View Tribute Book
I have fought the good fight; I have finished my course and I have kept the Faith 2 Timothy 4:7-8 King James Version (KJV) Job Well Done My Good and Faithful Servant Carlton “Bugs”/”Lucky” Lindsay was born on Thursday, July 17, 1930 in Palmyra, New Jersey to the late Carlton Quinton and Farrell Lindsay. As an only child, Carlton learned the importance of work and family. Carlton was a no nonsense, hard-working, and particular man. He was a son that visited his mother every single day, even the last 10 years that she spent in a nursing home. He was a husband, a father, a cousin, an uncle, a grandfather, and a neighbor; he was a gardener that was very serious about his lawn care, a great dancer, and a soldier. Carlton was a sharp dresser that liked his tie tied with a small knot and a hat to match his suit, an Eagles and Phillies fan, a friend, and a Man of quiet Faith – he was our beloved “BUGS.” As a child growing up in the early thirties, Carlton’s childhood was shaped by the virtues of hard work, and devotion to family. Bugs enjoyed swimming in the creek off the Delaware River and playing on a traveling ALL BLACK baseball team coached by Charles Pratt Sr. His modest yet deeply honorable foundation propelled Carlton to fulfill his promise as a family man and a role model. In a life that spanned nearly a century, he was a witness to all the ills of our country AND the extraordinary advancements in society and in his own life. Fondly called “BUGS'' or “Lucky” by his family and friends, Carlton attended the public school system of Palmyra, New Jersey and at a young age his very first job was a caddy at the Riverton Country Club this is where he learned how to play black jack. As a teenager, out of a sense of both adventure and necessity, he set out to make his way in the world by enlisting in the US Army. As a Korean War Veteran, Carlton was honorably discharged but not before earning a Purple Heart for his bravery. When he returned home, he joined that generation of workers who built America. Throughout his life, he worked as a skilled laborer – he was gifted with his hands. He was a Tree Surgeon, worked for Ken Smith pools, and concluded as a Construction Worker for Costanza construction and the Local 222 Union. Carlton’s 91-year journey took him through many twists and turns. After returning home from the US Army, the dapper Carlton met the love of his life, the stunning and ever-gracious Hannah Winston. After a short courtship, they married on October 8th 1966. All that knew him, knew that he adored his wife and partner of 55 years. The depth of their love and devotion to each other cannot be overstated. Love is a choice. Together he and his wife built a life and a family. In his early forties, together they decided to adopt a three-year-old child from an orphanage in Philadelphia, Pennsylvania. They made their son the center of their life, teaching and pouring into him all the love they had. They developed that little boy into a man, a man who later would become a respected educator, father, Pastor, and leader. Bugs also was blessed with a daughter, Lynne Collins, who he adored and loved. Love is a dance of joy. Bugs worked hard and played hard. He balanced hard work and fun; sweat and style, humility and pride. Trips to Atlantic City, Black jack and sharp as a tack; from the jitterbug to the easy glide of ballroom dancing; calm, cool and collected, even in challenging moments, charming and kind. He was diligent with a touch of class, great smile, beauty and style in all things evidenced by the most beautiful , meticulously kept yard in Palmyra, the cars in the drive and the sartorial elegance of a hardworking man. As his generation taught us: It takes work to be this smooth, and this good. Love is work. Love is a choice, a dance, a labor of honor and he will be remembered for what he learned and taught: hard work, commitments, courage, all with a touch of class. Carlton’s life-long friendships with Merrill Pratt, Billy King & Ronald Catlett, Jake Grimes & Dickie King (deceased), devotion to his wife, children and grandchildren were the blessings of a life well-lived. After a long and courageous struggle with an illness, suddenly on Saturday, February 5th 2022 our Lord and Savior called Carlton to his heavenly home and rest. He leaves to mourn him, his devoted wife of 55 years Hannah Winston Lindsay, his children: Lynne Collins of Philadelphia and Jimmy C. Lindsay Sr. (wife Katina) his grandchildren: Justin Nottingham, Kaylin Faith Lindsay, Jimmy Carlton Lindsay Jr. and Kennedy Joy Lindsay, his brothers and sisters-in-law: Willard Mahan (Emily), Carl “Billy” Mahan (DeeDee), Shirly Hardy (Lou), Nelson Hawkins (Mary-deceased) Cousins and many, many loving nieces and nephews, relatives and friends.
Friday
11
February