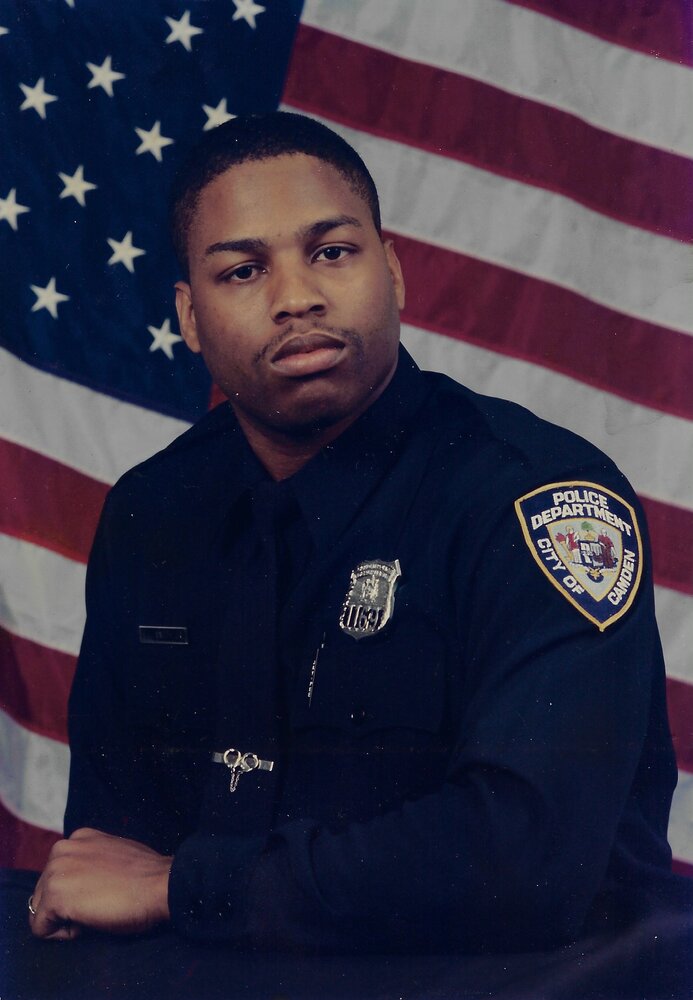 Please share a memory of Marvin to include in a keepsake book for family and friends.
View Tribute Book
Marvin Lynn Smith Jr., “Lenny”, son of Barbara Pinkston and the late Marvin L. Smith Sr, was born on December 29, 1972, in Camden, NJ. He received his education in the Lindenwold, NJ school system where he played football and became popular due to his talent and personality. He graduated from Overbrook High School in Pine Hill, NJ. He furthered his education by attending Benedict College in Columbia, South Carolina and graduated from the Academy of Culinary Arts in Atlantic County on December 21, 1995. He excelled as a baker and chef. He worked numerous jobs, one of them being a chef at the Tropicana Casino in Atlantic City. He was known for his delicious version of “Shrimp Alfredo”. Lenny later decided to become a police officer. He graduated from the Burlington Police Academy in Burlington, NJ and then became a Camden City Police Officer from 1998 – 2014. Lenny met Rosalind Mickles in 1993. They married in 1996 and were blessed with 4 beautiful children and 2 grandchildren from that union. He was a great father. Lenny loved to take his family on vacation, to the movies and eating out. Lenny also had an expensive taste. He always bought things that were top of the line. He accumulated a lot of gadgets. Some of the fond memories shared by his children includes Lenny recording all his sons’ football and wrestling matches, eating the famous Donkey’s cheesesteak, late night talks, listening to music together, watching movies and taking shopping trips to Sam’s Club. Lenny’s oldest son Marvin, lovingly called his dad “Papa Doc” and said he was taught how to be a man and learned the essential characteristics of a man by his dad who set a prime example. His daughters shared that their dad always told them how beautiful and smart they are and how proud he was of all of them. Lenny was extremely witty, charming and had a sweet spirit about him. He had one of the most calming dispositions. He was known for his great sense of humor and infectious laughter. Lenny has a way of making a tense situation laughable and made everyone he encountered feel as though they had just made a new friend. Lenny had a zero tolerance for bullying, he prevented multiple people from being bullied. He was a great protector and best friend to his younger brother Montez. Lenny accepted the Lord Jesus Christ at a young age. He always spoke of Jesus Christ as his Lord and Savior. Before he left this earth, he made it known that he was a “child of God” and that Jesus “had him.” Lenny was not afraid. He would say “God is great, and Jesus is Lord.” Final remarks from his children Thank-you Daddy for loving, protecting, and providing for us. You took us on many trips around the world. Thank-you for being our biggest fan. Continue to watch over us. We will always remember you as being funny, brave, bold, smart, and adventurous. You will forever be our father and will always be in our hearts. Love Forever, Marvin, Jasmin, Jada and Jordan Lenny passed away peacefully with his family surrounding him. Lenny is survived by his wife Rosalind; his children, two sons Marvin Lynn Smith 3rd and Jordan Smith, two daughters Jasmin Smith and Jada Smith; two grandchildren Amaya Smith and Anthony Smith; his mother Barbara Pinkston; his stepfather James Pinkston; one brother Montez Smith; one sister-in-law Della Smith and many aunts, uncles, cousins and friends.
Print
Saturday
12
February