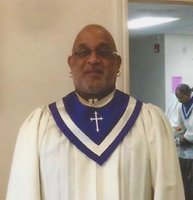 Walter R. Hoover, Jr.; better known as "Skeeter", was born on March 17, 1959 at Zurbrugg Memorial Hospital, Riverside, NJ to the late Walter R. Sr. and Laura I. Forman-Hoover. Skeeter attended Beverly City Public School, graduated in 1973, he went on to attend Palmyra High School from 1973 - 1977, where he joined the track and basketball teams, graduated June 1977. In November 1977, he enlisted in the US Air Force, obtained an Honorary Discharge in October 1978. Upon arriving back home from the US Air Force, he obtained employment with Wall Rope Works for several years, then became employed with ATI Glass. He later attended Lincoln Technical School for HVAC, which allowed him to obtain employment with LUX Inc. in Mt. Laurel, NJ. He later joined Ball Plastics in Delran, NJ until the business closed in 2012. He went on to join Virtua Hospital until obtaining employment with Keystone Automotive in Palmyra, NJ until his health declined. Skeeter was baptized at Bethel AME Church, Beverly, NJ where he attended for many years. He later joined St. Paul U.A.M.E. Church in Palmyra, NJ where he was a member of the Usher Board and Men's Choir. Skeeter enjoyed playing basketball and bicycling. In his younger years, he loved riding his dirt bike with his nephews, Donnie and Marc Worthy. A list of Skeeter's favorite things: Group - Earth, Wind & Fire Songs - Open Our Eyes Howard Hewitt - Say Amen Lionel Richie - Jesus is Love He loved attempting to play his "Kalimba:" Basketball team - 76ers Football team - Pittsburgh Steelers He had a love of traveling to the islands and wants his ashes spread in the Bahamas. Spring and Summer were his favorite time of year when he could cook on his grill. He thought he was a Master grill man. He absolutely loved his stuffed lobster tail with crabmeat from Georgine's Restaurant in Bristol, PA. Walter "Skeeter" leaves to cherish his memories, his daughter Tracee Hoover of Pennsauken, NJ; his son Julian Hoover of Maryland; stepson DeAnde Scott of Cinnaminson, NJ; two grandsons Claudy Vazquez Jr. and Asaiah Hoover of Pennsuaken, NJ; one brother Steve Hoover of Delran, NJ; three sisters Theresa Hoover-Worthy of Cinnaminson, NJ, Helen Hoover of Mt. Laurel, NJ and Karen Hoover-Jackson of Claymont, DE. His long time loving and devoted friend Michele Dobbs of Palmyra, NJ; two step-daughters Leslie and Lauren of Palmyra, NJ; grandson Loyal and a host of nieces and nephews. A host of special family and friends that have known him since his childhood in Beverly, NJ. Special thank you to our cousin Cornell Hawkins who was there through it all.